For the 12th consecutive year, the Olympus Marathon, a unique trail running race along the paths of the mythical „Mountain of the Gods“, Olympus, was successfully completed on June the 28th. 654 athletes from 20 countries participated with the slogan “Running with the Gods” and honored the event with their presence. Spanish champion Hernandez Gispert Jessed won the race, with Greek champion Dimitris Theodorakakis taking third place, while Vokueva Zhanna from Russia was the winner in the women’s category.

The Pieria and Dion-Olympus Regional Units supported the marathon, more than 400 volunteers and local associations from the wider community offered their valuable services, with DIOS Mineral Natural Water included amongst the race sponsors. The excellent conduct of the event was widely covered by local and national media and organizers renewed the appointment for the last weekend of June, 2016. 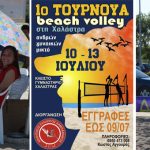