A journey through the paths of the Greek tradition was the central theme of a special event, held on Saturday, April 9th in the Main Ceremony Hall of the Aristotle University in Thessaloniki, organized by the “Family and Child” Charity Association under the auspices of the Region of Central Macedonia. Over 350 dancers from twelve Dance & Cultural Associations represented every corner of Hellenism in the “3rd Gathering of Pontians, Anatolian Greeks, Macedonians, Epirots, Thracians and Cretans”, initiating all guests into their local manners and customs and reminding them of our historic roots through traditional Greek dancing.

In the course of the event, Mr. Georgios Charisopoulos, honorary president of the Pontian Greeks Association in the Wiesbaden & Mainz areas, was awarded for his lifetime achievements on behalf of the Greek Diaspora, while a number of traditional Greek singers and musicians, headlined by the famous Drossos Koutsokostas, contributed their talents into this unique blending of charity and tradition with their music presence.

All proceeds of the event will be donated towards the “Family and Child” Charity Association actions, implemented thanks to the kind and active participation of sponsors, such as the DIOS Natural Mineral Water, covering for the needs of the event’s dancing groups. The “Family and Child” Charity Association was established in the midst of the latest financial crisis, as an association with a certified charity action in order to support families in need of substantial assistance, in the context of a non-compromising philosophy with the depreciation of the family values and the wider society. It consists of a group of sensitized volunteers, claiming the right to defend fundamental social rights through a series of multi-level organized structures and external actions, in collaboration with similar institutions, in order to cover the needs of more sensitive social groups. 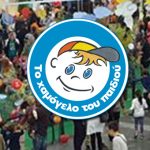 2nd Festival for Children by “The Smile of the Child”News