11/01/2015
Light, Water and Glow!
The archaeological discoveries of the dawn of Greek civilization, the Cycladic figurines, with their subtle light forms and almost flat bodies, inspired the painter Ioanna Tsachtsirli to create 30 works of mixed technique, textured surfaces on wood, that exude the light and positive energy of the Aegean islands, praising the beginnings of Greek culture.
Stunning representations of primitive shapes that enchant, creations that bring a shimmering dynamic to light, combining vivid colors with the ancient Greek element, form the exhibition entitled “Maira”, meaning “Glow”, which stands out for its special, personal style and its subject’s timelessness.
The “Maira” solo exhibition „Mary“ began its journey in 2013 from the Cultural Center “Mikis Theodorakis” in Holargos and later in both Elefsina and at the Empeirikeion Foundation in Andros. The latest station in its artistic wandering was the exhibition at the “Peritechnon- Karteris” Gallery in Kolonaki, Athens from December 18 – January 10, sponsored by DIOS / DIOS Natural Mineral Water.

Born, raised, living and working in Athens, Ioanna Tsachtsirli has studied Interior Architecture, Decoration and Design and has worked as Set Design Manager in Photographic Studios. Also serving as an assistant professor in Decorative Designs and Colors courses, she has participated in many group exhibitions. 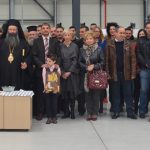